Home » Inspiration from the past: The 70’s

Inspiration from the past: The 70’s

The 70’s was undoubtedly a strange time for style. For many the first thing that comes to mind is over-sized collars, bell-bottom trousers and some questionable colour pairings – which wouldn’t be entirely incorrect. The trick to taking inspiration from such a bold period in time (without looking like you’re in fancy dress!) is to take concepts and water them down, picking out the best bits and re-appropriating them for the current sartorial climate. 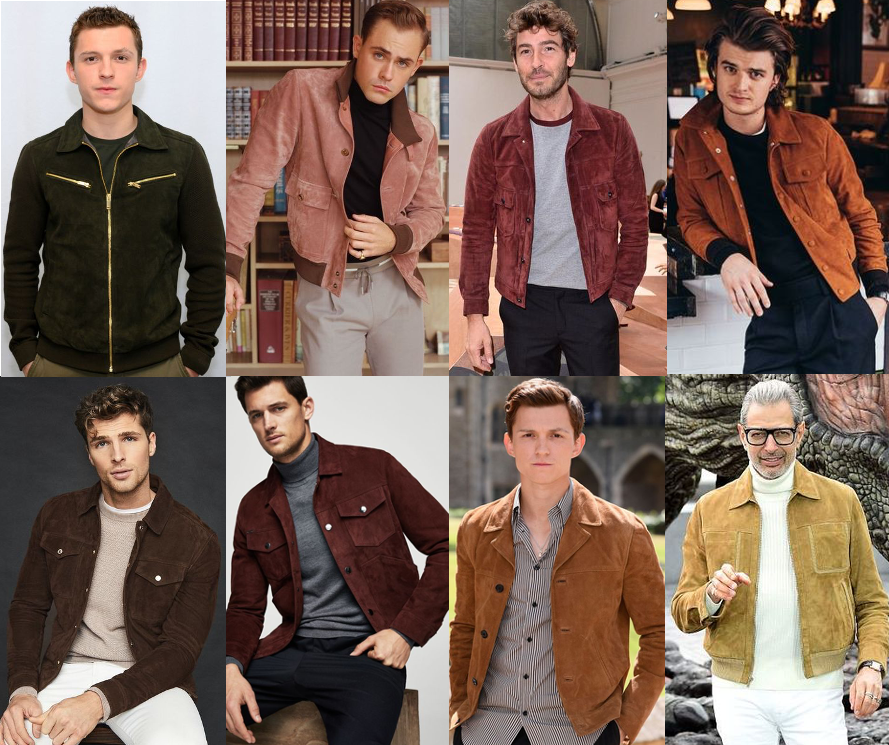 Suede started gaining in popularity through the 60’s and 70’s. For some, suede jackets still mean fringed cowboy jackets that wouldn’t be out of place on a Woodstock hippy. The suede material itself isn’t the source of this costume party image, but rather the over-the-top retro styling that went with it.

Take the suede jacket idea and tame it by removing the fringes and oversized collars. Look for more clean lines and sharper more modern fits. A well-fitted suede collared jacket worn with chinos or trousers is a suave alternative to a suit jacket, or a bomber jacket in suede is a more casual option for pairing with jeans. 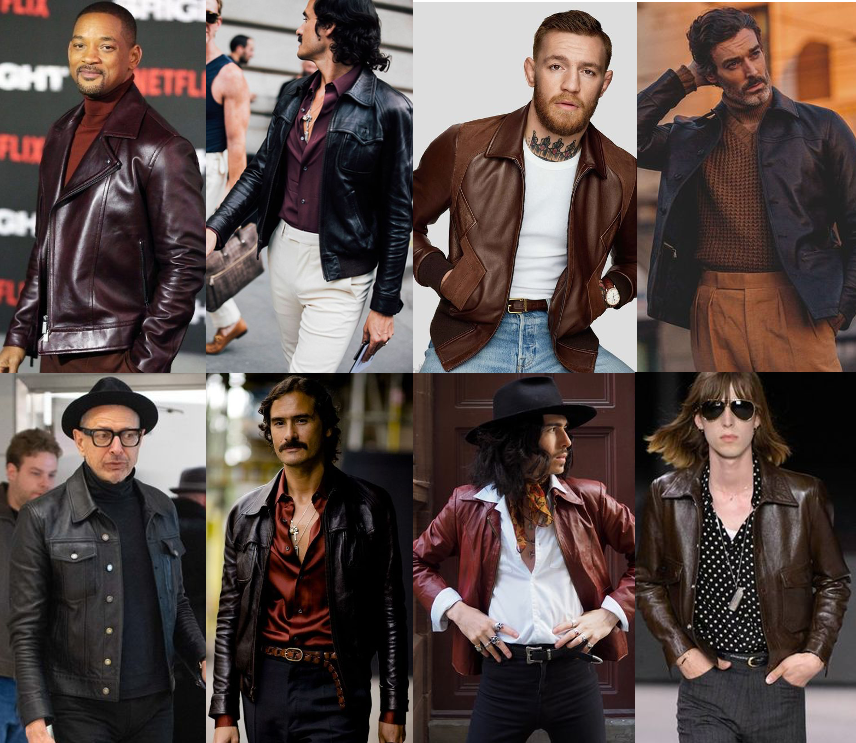 Leather jackets have been around in one form or another since well before the 70’s, but it wasn’t until the1950’s that superstars really thrust leather into the spotlight. Brown and black have always been favoured and that stands even to this day – though modern leather is available in a much wider range of dyed colours.

Though leather jackets seem to be an immortal go-to through the styles of time, there are still style pitfalls that can instantly make a classic style just look dated. Like with its suede cousin, avoid exaggerated collars, fringes and big baggy fits. Look instead for sharp silhouettes and evenly proportioned designs. 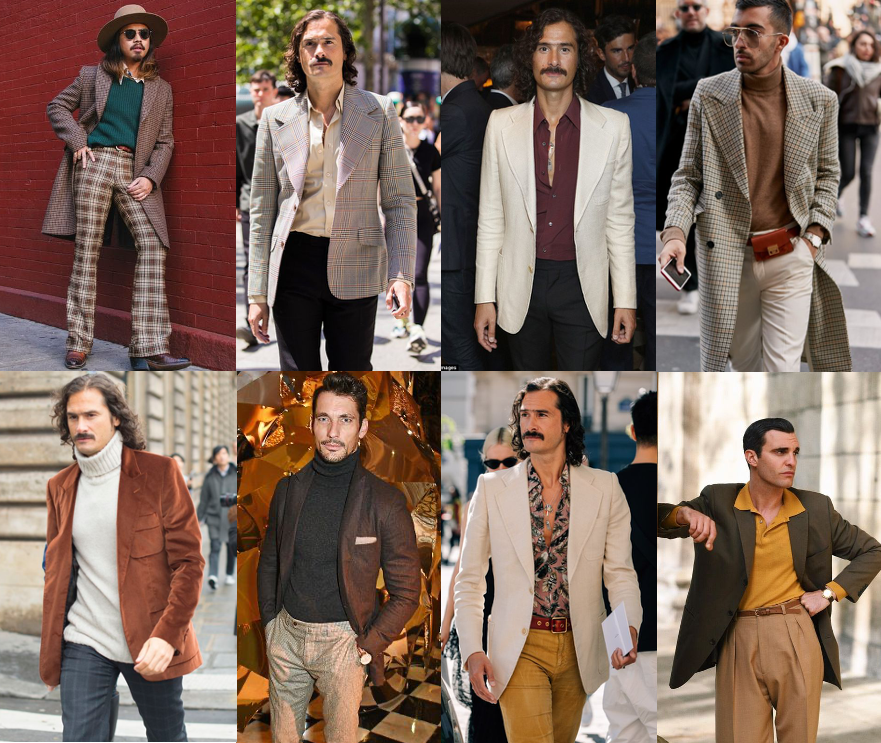 Mixing and matching garments is a useful way to get more looks from your suits without having to keep buying more garments, this remains a great tip even now. The very nature of the 70’s style was all about experimenting with colours and patterns, so when it comes to mixing and matching there’s much to be learned.

Rotating the colours in your wardrobe is a great place to start, the safest matches are earthy tones such as browns and creams. Jackets and trousers plain of pattern and light in colour allow for a loud shirt which adds another depth to your look. Another way of achieving more texture and depth in your outfit is mixing garment cloths in your ensemble, such as velvet jackets or cord trousers. 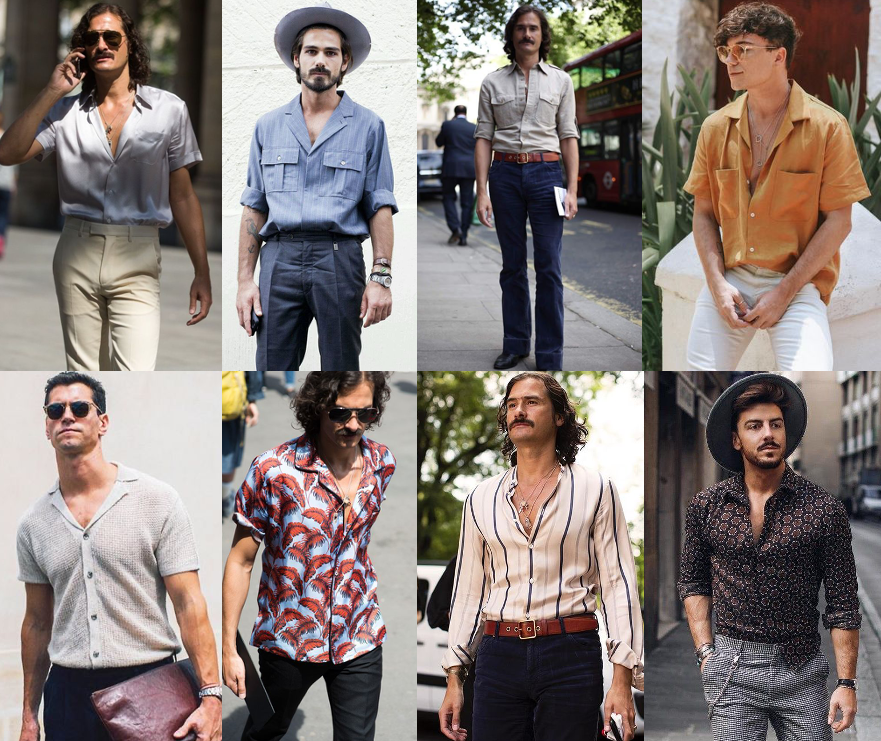 Some of the shirts that came out of the 70’s were sheer comedy. Harry Hill collars, too many pockets and cloths resembling curtains weren’t exactly the highlight of the decade, but there are certainly elements that can be recycled.

Proportion is a reoccurring resolve for a lot of seventies style sins. The style of wide open cuban collar is a great look, the excessive amount of collar was the issue. Similarly with the patterns, a bold print and bright colours are fine, but only if the colours are complimentary to one another and the pattern isn’t already being used on a tea-cosy. 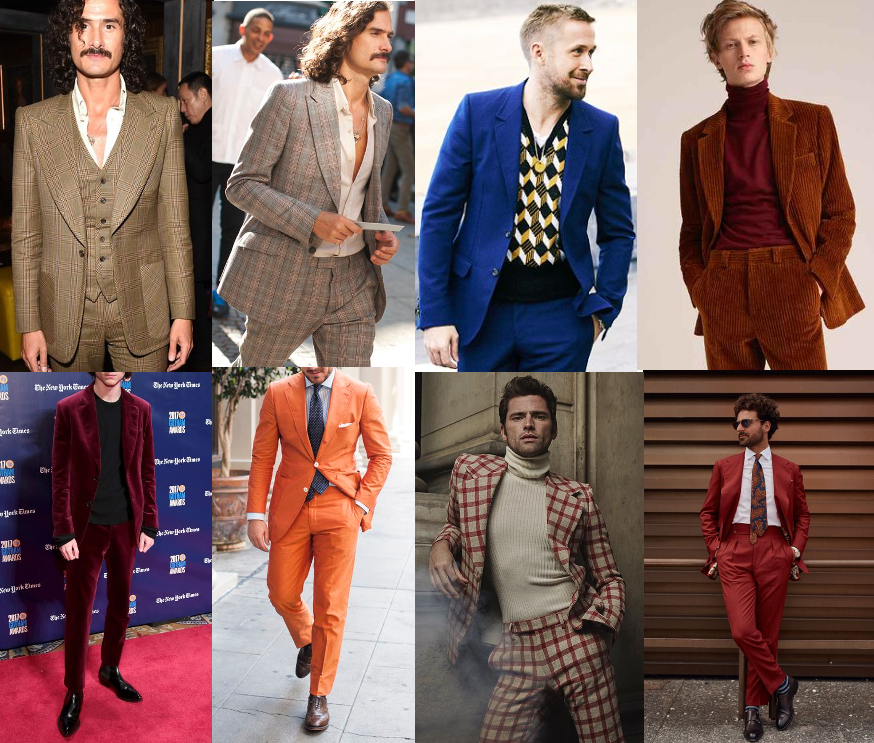 They say style comes around in circles, which may help explain how the ludicrously ostentatious suits of the 70’s are making their way back into modern fashion. The style of suit has evolved over generations, but the idea of bright colours and loud checks is back now with a vengeance.

As suit wearing is becoming less common in offices, more people are turning to the suit as a casual garment for just going out in. As suits step away from being a professional requirement, the go big or go home attitude of brash seventies suits becomes more appropriate than ever. 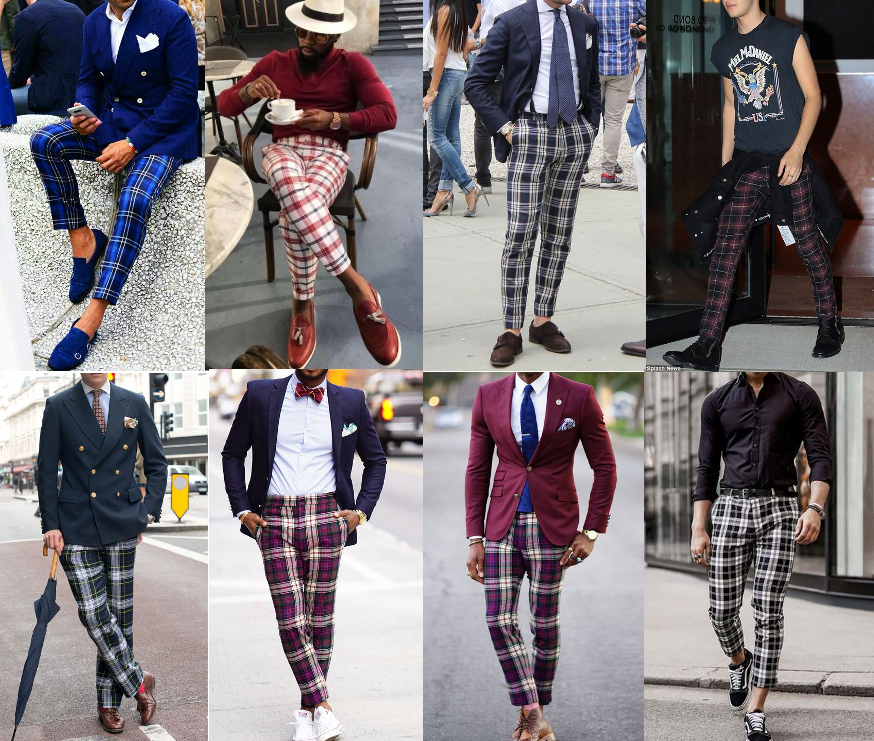 Check trousers have cropped up frequently in the fashion world over the years. The 70’s saw check trousers as the height of fashion when worn with roll-necks or a shirt. The punk movement took the tartan trouser and put it with chains, T-shirts and an attitude.

In the modern world check trousers have made their way into sportswear in the form of tracksuit bottoms, as well as having been the golfers choice for many years. Check trousers have a place in sports style, punk rock style, smart-casual suiting and Dinner wear, so it’s hard to go wrong.

PrevPreviousCOVID-19 and you
NextSuits and T-Shirt StyleNext