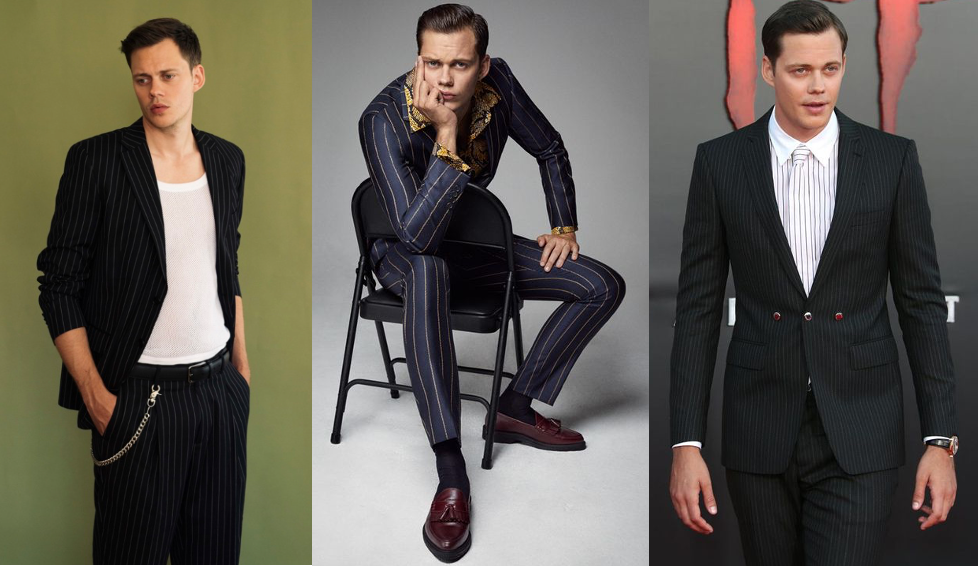 Bill Skarsgård shot to massive stardom after starring in the remake of Stephen Kings IT. No stranger to fame and certainly no rookie when it comes to acting, Bill comes from a large family of strapping Swedish actors. Along with the obvious talent Bill possesses, he also has a knack for making a suit look damn good. Here’s how he does it:

The classic blue suit is of course a staple for any gent. Work suitable, simple and flattering, it can never fail, but Bill tends to take the classic blue suit and spice it up with his own little flair. Understanding the power of layering, Bill adds texture to his looks with add on garments like his colourful patterned cardigan and bold shirt.

If he’s opting for a plain white shirt, he satisfies the texture bug with the suit itself, wearing a pattered velvet suit featuring wide peaked lapels and a strong British Shoulder. On the rare occasion Bill dons a tie he again adds textures and layers with a tie bar and a shirt of lighter blue than the suit, adding extra depth to an otherwise safe ensemble.

A white shirt under any suit, regardless of the colour or pattern is always a go-to look. Besides white, lighter blues and light pinks are the next most popular for most, but for Bill a darker bolder look suits his style better – he is Pennywise the dancing clown after all.

To achieve this darker, moodier look, Bill wears Navy shirts under Navy suits and black shirts under grey suits. Against his pale Swedish complexion the darker tones create a strong contrast and a sharp silhouette. A slightly harder look to try and recreate in a work environment, but after hours or at an event and the tone on tone is a guaranteed power look.

Pinstripes are another classic suit style that Bill wears with little twists in order to make it work in out-of-office environments. Rather than sticking with the obvious white shirt, Bill relaxes the Pinstripe ensemble by pairing it with a crisp and casual white T shirt and a belt and chain. Little touches like add an individuality and a casual edge to an otherwise fairly generic suit.

If not a T shirt, Bill isn’t afraid to add a pattern to his stripes. By wearing an open collar snakeskin shirt under his wide navy blue stripe suit he’s created a unique, bold and yet somehow still classic look. In the third example above he’s really embraced the stripe by pairing a matching stripe tie and shirt combo underneath the shadow stripe suit. All these vertical lines draw the eye up the body and create the illusion of height – a useful tip for more vertically challenged gents that feel they require a subtle boost.

Wearing suits of an earthy tone is great way of creating a bolder look, without coming across as garish which brighter colours tend to do. Browns, greens, oranges and yellows have autumnal connotations which makes them great options for that time of the year, but who says you can’t pull off the earthy tones all year round?

Bill makes his mustard suit above on the left more casual and summery with the classic addition of a white T and belt – also adding the contrast black and white loafers for extra cool summer panache. By contrast the rust corduroy is already a thick warm winter cloth and the addition of the warm red shirt Bill has paired it with paints a perfect autumn scene. The first suit above is the middle ground, great for almost any cloudy British day. The mid weight cloth can be paired as Bill has with his shirt and tie – perfect for all year office wear. Or, a roll-neck under the suit would make for a perfect layer of insulation on a more brisk spring or autumn morning. 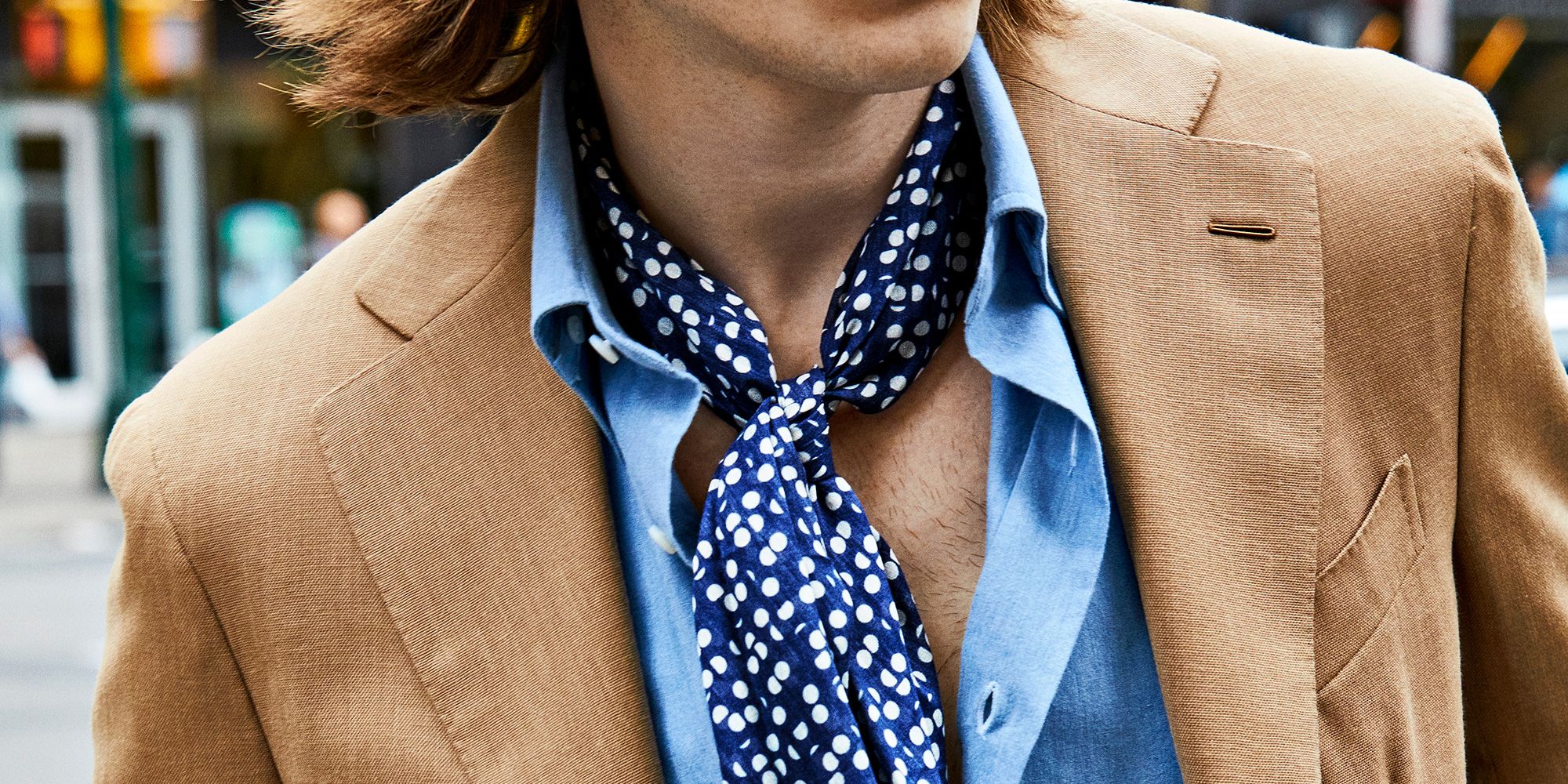 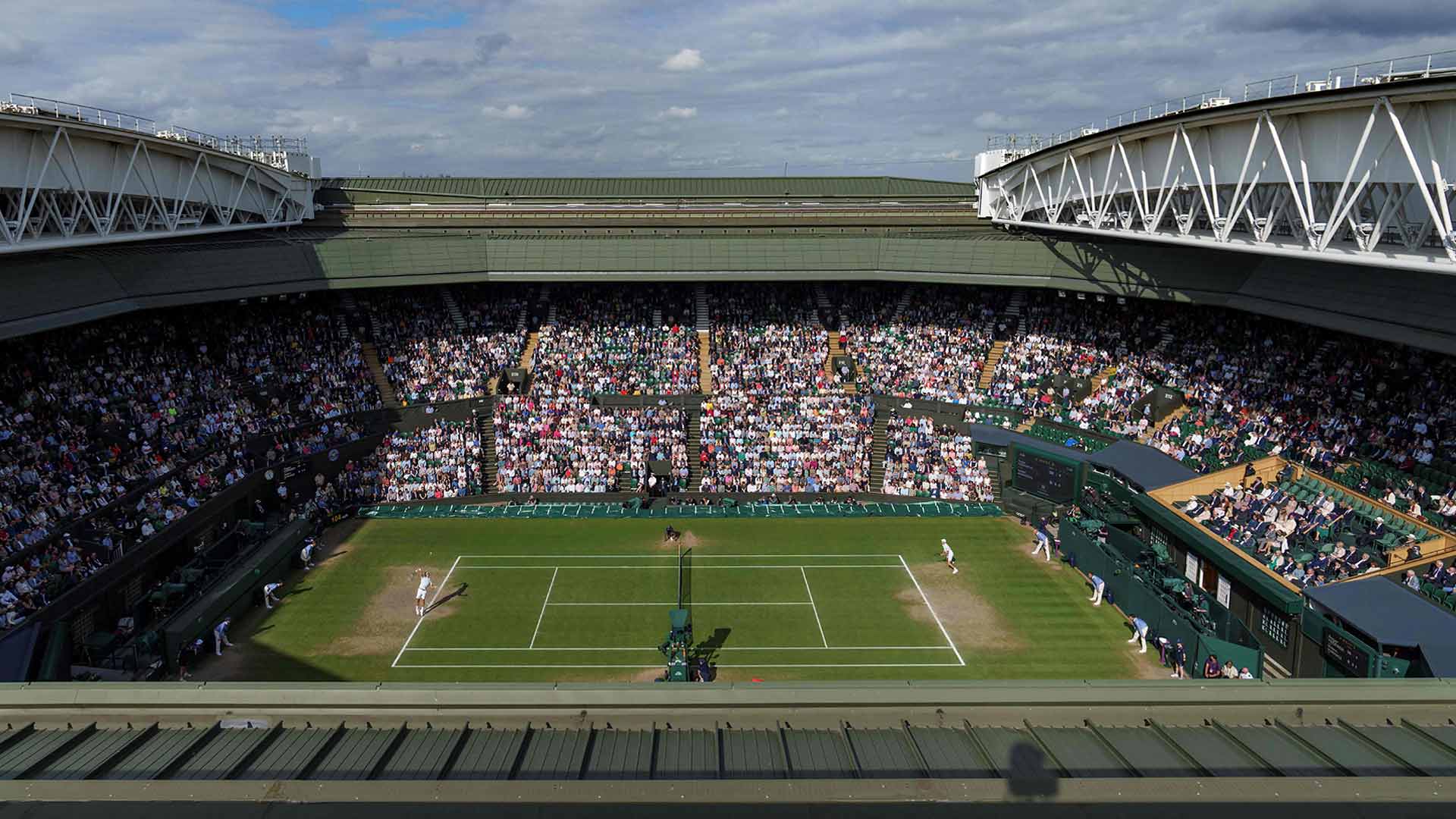 Every year Wimbledon is a great place to get tailoring and casual wear inspiration, whether that’s from celebrities or the general public. We’ve picked 4 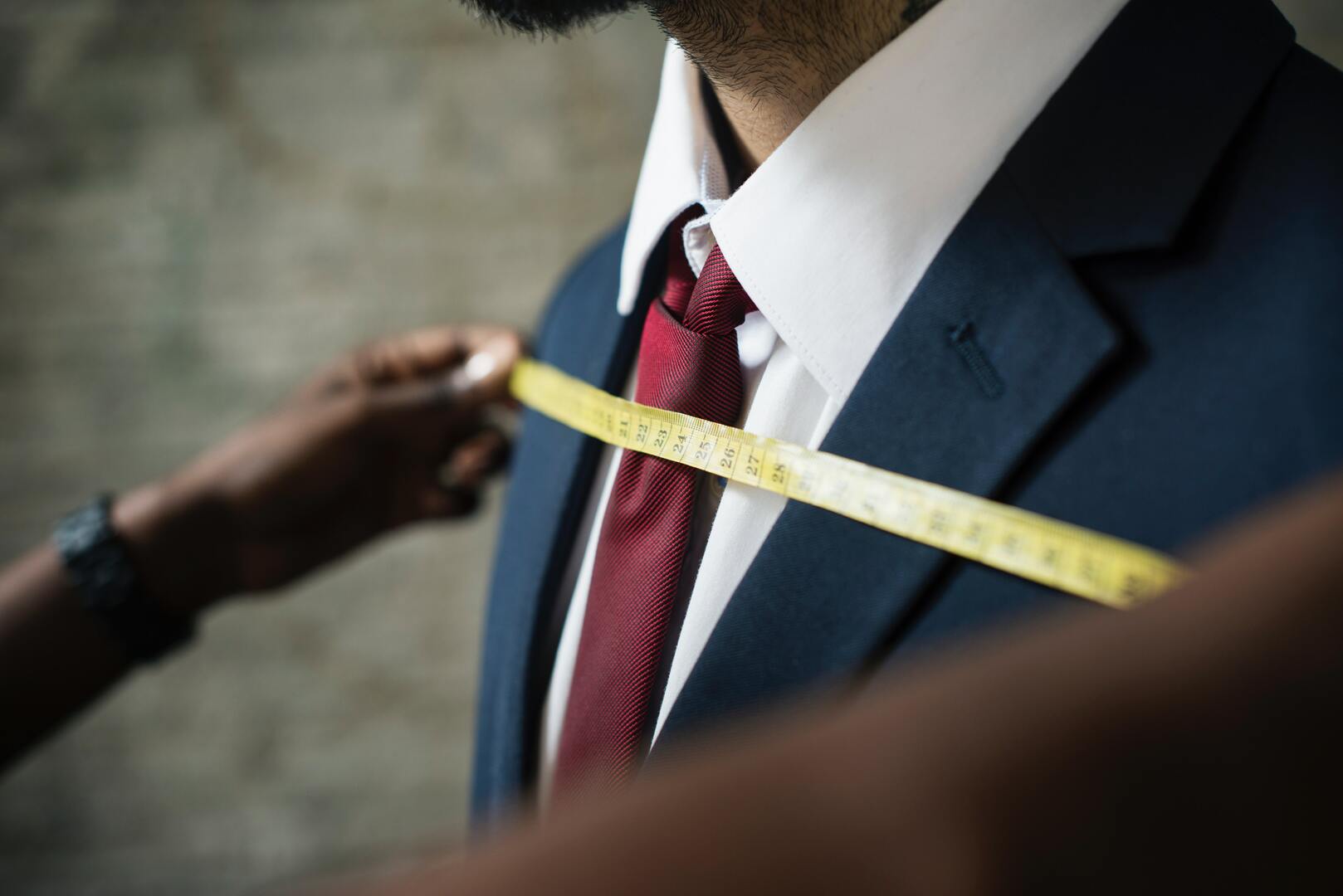 A guide on how to measure men for suits

Whether it’s a tuxedo, a shawl chapel, or any other style, it looks good only if it fits you well, which makes it important to